In this blog, we will be looking at deploying an application on Kubernetes using infrastructure as code. Describing your infrastructure as code is a good way to build and maintain that infrastructure consistently and securely. There are numerous frameworks available to do this for cloud infrastructure. Some are for multi-cloud usages, like Terraform, others are vendor-specific like CloudFormation (AWS) or ARM (Azure).

For this demo, we will be looking at setting up WordPress on Kubernetes in AWS. Let’s break this down into what we are going to build/deploy:

In this particular case, it is required to use EKS on EC2. Currently, CloudFormation and CDK don’t support provisioning EFS on Fargate.

In order to deploy the WordPress container, we will be using a Helm chart. For those not familiar with Helm, I’ll provide a quick rundown. Helm is a tool that is used to manage Kubernetes applications. You can compare it to YUM, the package manager for RedHat. A Helm chart can be used to deploy anything from a very simple one pod application to something very complex consisting out of multiple server applications and databases. There are a lot of Helm charts made publically available for OpenSource projects. For this demo, we will make use of a WordPress chart provided by Bitnami.

As mentioned before the infrastructure will be coded. As it is on AWS, CloudFormation would make the most sense. However, AWS provides us with another great tool, namely the AWS Cloud Development Kit (CDK). CDK is a programmatic framework that ultimately produces CloudFormation for you and deploys it using stacks. CDK provides basic building blocks that provide you with all the resources required to get things done, and this drastically reduces the number of lines needed to code compared to pure CloudFormation.

One last thing, the code in this blog is not in any form or shape intended for production environments. To keep the example code clean and easy to follow, aspects like security, availability and maintainability have not been taken into consideration.

I won’t go through the steps of installing CDK; I am assuming you have done so already. Open up your terminal and create a directory where we are going to house this project.

If all is well, you should have output similar to this.

For the vpc we need to install the cdk ec2 package. From your terminal run the following:

With all this done, we can finally write some code. Open up the directory in your favourite IDE (I use VScode). Open up lib/cdk-helm-demo-stack.ts. To start of with, the VPC is going to be created. It’s going to consist out of 2 subnets, a public and a private one. The snippet below is all that is required to make the VPC and all other required resources.

Now it’s time to deploy the code. Go to your terminal once more and first build your package, synth it to see the differences, and if you are happy with the outcome, deploy the stack.

The lines of code required for a basic EKS cluster are remarkably few.

If you wish to use a version of EKS that isn’t available in CDK yet, you can always create a version from a string like so.

Now that we have a cluster, we can add the helm chart. As mentioned before, for this demo I chose the Bitname WordPress helm chart. The chart comes with a lot of configurable options. For this demo, I’ll only modify a few, like the blog’s name, the username and the password.

Admittedly, if you have a large number of values to configure, defining them all in your CDK will result in cluttered code. You might want to store the values in a separate file.

With the addition of this code, our cluster and chart are ready to be built and deployed. When all is done, your output should be similar to this

The output provides the command to update the kubectl config. After running it, request the services to get the hostname attached to your installation. Copy the URL mentioned in the External-IP and paste it into your browser to see the end result of your deployment. 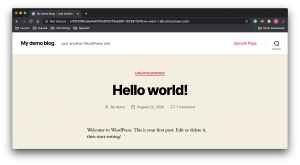 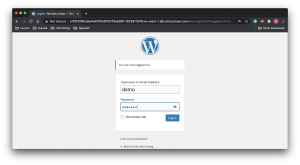 There you have it. A WordPress blog deployed using CDK and Helm. All the code is available from this git repo. There will be a second part to this series, where instead of using the default ingress controller, the AWS ALB Ingress Controller and External DNS will be used.

By default, the chart also creates a database pod. When you uninstall the chart, the PVC that comes with the database pod does not get destroyed. Any subsequent deployments of the chart fail because it can’t complete the new claim. You have to delete the PVC by hand.

Partner at FourCo Specialising in Cloud and Big Data infrastructure.

We use cookies to ensure that we give you the best experience on our website. If you continue to use this site we will assume that you are happy with it.Ok